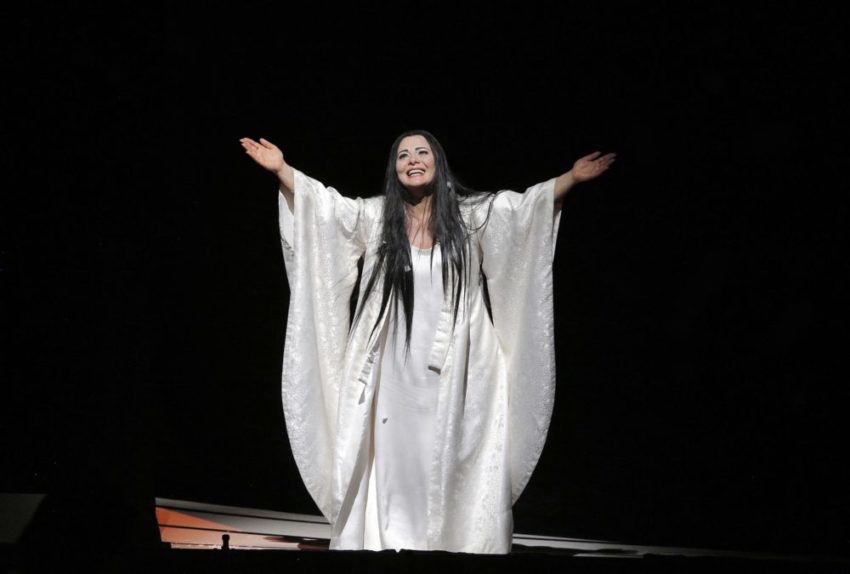 It’s been two years since soprano Lianna Haroutounian made her superb San Francisco Opera debut in the title role of Puccini’s “Tosca,” and some of us have passed the days since then watching the calendar, waiting for her return to the War Memorial Opera House. “Is it time yet?” we’d ask, in the plaintive tones of a toddler confined to an overlong car trip.

Then, on the afternoon of Sunday, Nov. 6, came the hypnotically fine opening performance of “Madama Butterfly,” with Haroutounian once again singing the title role. And oh, my sisters and brothers in impatience, it is definitely time.

No one could say that the splendor of Haroutounian’s artistry — the shimmery firmness of her sound, the voluptuous swell and fall of her vocal phrasing, the intensity and grandeur of her stage presence — came as any kind of surprise. These qualities were amply on display in 2014.

Yet it was a joy not only to bask once again in the magnificence of her singing but also to hear it transferred, beautifully intact, to a new dramatic forum. Where Haroutounian’s Tosca had been knowingly calculating — using her technical prowess to create a fully rounded portrait of a stage animal — her portrait of the ill-fated teenage geisha Cio-Cio-San traced a progression from naivete to fierce determination. Throughout the first act, she seemed to be drifting into her sham marriage with the faithless Pinkerton in a blissful dream, borne along on the billowing strains of Puccini’s music. Not until grim reality set in during the third act did her Cio-Cio-San reach deep within to conjure up the fortitude to deal with the betrayal of all her hopes.

Just when it seemed the San Francisco Opera season was winding down, the company has introduced a “Madama Butterfly” that absolutely knocks it out of the park.

The reason is Lianna Haroutounian, whose impassioned, stunningly beautiful vocal performance in the title role breathes new life into Puccini’s melodrama. Sunday afternoon at the War Memorial Opera House, the Armenian soprano created a “Butterfly” for the ages. That’s saying a lot, especially in view of San Francisco Opera’s long history with this opera. The company first produced “Butterfly” in 1924, and leading sopranos including Licia Albanese, Leontyne Price and, most recently, Patricia Racette have sung it here since then.

Haroutounian, whose only previous company assignment was in the title role of “Tosca,” makes this “Butterfly” her own. As Cio-Cio-San, the lovestruck Japanese teen whose sham marriage to an American serviceman ends in tragedy, the soprano inhabits the role completely and decisively, tracing the character’s arc from shy hopefulness to utter despair. The role’s gleaming high notes and poignant utterances are hers to command, and she made the most of them throughout this revival.

Mining the deep vein of emotionalism in Puccini’s soaring score, her voluptuous, artfully shaded vocalism and delicately nuanced characterization added up to a gripping portrayal, and her expressive singing in the role’s great set pieces, including the timeless Act II aria, “Un bel di,” was nothing short of brilliant.

Armenian soprano Lianna Haroutounian, who made such a sensational debut here in 2014 as Tosca, returned to San Francisco Opera for ten performances November 6-December 4 as Cio-Cio-San in Puccini’s Madama Butterfly. Haroutounian has been hailed by Opera Today as “one of the major voices of our time,” and her interpretations of Puccini’s soprano roles are already considered benchmarks. Haroutounian’s Cio-Cio-San at the November 15 performance I attended was incandescent, both vocally and dramatically. Haroutounian sings with perfect pitch, precise diction, an exquisite sense of dynamics, and luscious lyricism. Her soprano voice is voluptuous in the lower register and scintillating in the upper register, with no break whatsoever between the chest tones and head tones. Dramatically, she portrays both the delicacy and vulnerability of her Butterfly character and the power and pathos of Butterfly’s love for the American sailor Benjamin Franklin Pinkerton. This interpretation, with its acknowledgment of vulnerabilty, sets Haroutounian’s Cio-Cio-San somewhat apart from the Patricia Racette version of this role that has reigned here from 2006 to the present, for Racette, who sang beautifully, emphasized the steely and unyielding quality of Cio-Cio-San from beginning to end, whereas Haroutounian traces the changing trajectory of her character from vulnerability in Act I to steely albeit desperate resolve in Act II.